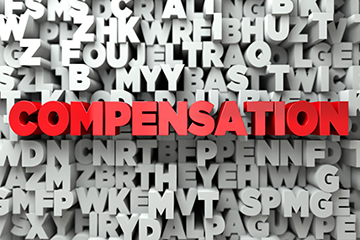 This is the third installment in a four-part CenterWatch Weekly series on the principles and best practices of setting investigator compensation levels that are both fair and compliant with federal laws. This week, we look at how methodologies for determining compensation can be combined and customized. Links to previous installments of the series are at the end of the article.

Each compensation methodology has its own set of strengths and weaknesses and each tends to work best with certain kinds of research-related work performed by a principal investigator (PI). Administrative tasks, for instance, are often most easily captured through a time-and-effort model, either estimating in advance the kinds of administrative work an investigator will take on during the study or having that investigator log the actual work as the study progresses. Either a relative value unit (RVU) or percentage-of-revenue model, meanwhile, is better at capturing clinical services and procedures that are already tied to existing reimbursement levels via Medicare current procedural terminology (CPT) codes or the Healthcare Common Procedure Coding System (HCPCS) and a fee schedule.

One option, then, is to create a hybrid compensation model like the one in Figure 1 that combines elements from these different methodologies. 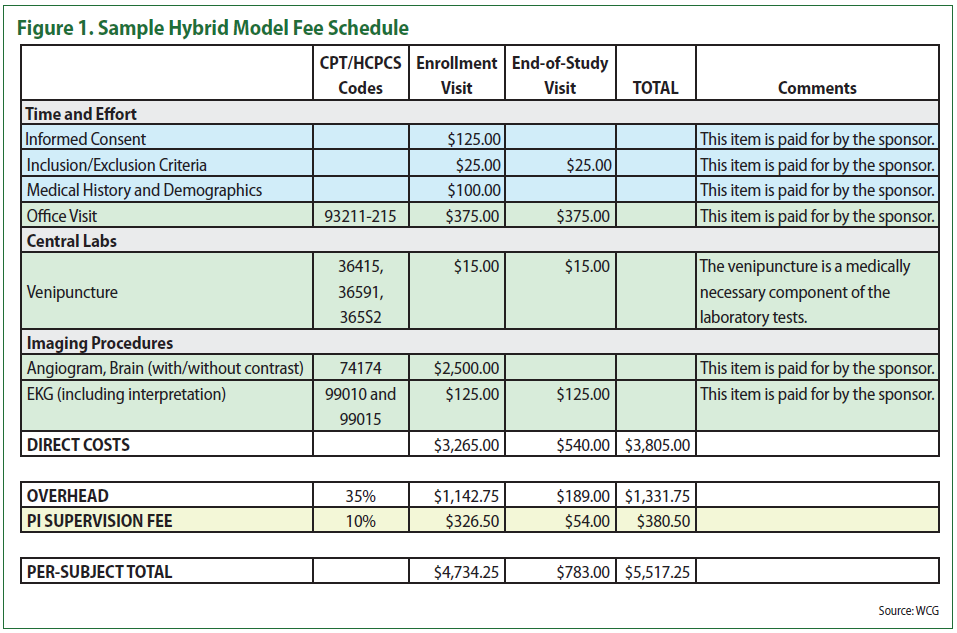 This particular model blends different payment methods in an attempt to capture each of their core strengths, according to Geoffrey Schick, director of site strategy partnerships at WCG. As you can see in the figure, administrative tasks, such as informed consent, a review of inclusion and exclusion criteria, and reviews of medical histories and demographics (shown in blue) are paid for based on a time-and-effort methodology. This could either be estimated upfront or recorded and tabulated as the study unfolds. The former would be less work for the PI, Schick notes, while the latter would produce results that are a more accurate representation of the work actually performed during the study.

In this particular hybrid model (based on a cardiology study), patient visits and procedures (shown in green) are paid out based on their CPT codes, using either an RVU methodology or a percentage-of-revenue calculation.

“Every study site is going to be different when it comes to how much complexity they’re willing to accept and how much administrative time and energy they’re willing to put into this,” Schick says. “But for organizations that are truly looking to engage with their investigators and create a model that will work for them, this sort of hybrid methodology can be a good option.”

At the bottom of the figure, you’ll notice something called a PI supervision fee (shown in yellow). This is, in essence, a way to capture the contents of that third bucket of investigator work: oversight and management of the study. You might think about it as a project management fee for a PI taking ownership of the clinical trial, Schick suggests. “It’s a surcharge based on a percent calculation of the direct costs of the study,” he says, “similar to the way you would calculate your overhead.” Direct costs would include office visits, procedures, the expense of a clinical research coordinator, etc., as well as whatever time-and-effort calculations you’ve built into your study budget. In the same way you would negotiate an overhead rate with the trial sponsor, Schick says, you would attempt to negotiate a percentage fee that would be paid directly to the PI.

The specific percentage, he suggests, could be based on a number of factors. Some specialties, perhaps, could earn a higher percentage based on the complexity of the research being performed. “Maybe the percentage for an interventional cardiologist is 10 percent,” Schick posits, “and for a pulmonologist, it’s 5 percent.” The percentage could also vary based not just on specialty, but on the complexity of a given trial. It could also be influenced by the PI’s level of experience, Schick says. “An investigator who’s done fewer than a dozen clinical trials over the past three years, maybe they’re only receiving a 5 percent supervisory fee vs. a higher percentage for your workhorses who are always involved in studies.”

There are several advantages to building in a PI supervisory fee. Most importantly, Schick says, it recognizes the added responsibilities a PI is taking on in a trial and helps differentiate those responsibilities from the work of sub-investigators. It can also increase the earning potential for a PI as enrollment increases and the administrative oversight responsibilities grow. Still, it would be important to document the justification for these increases in a way that steered clear of any behavior disallowed by the Anti-Kickback Statute or the Stark Law, which, like the Anti-Kickback Statute, prohibits physicians from making referrals for Medicare- or Medicaid-payable services if they or their immediate family members could gain financially from those referrals.

It can be a fine line, Schick says, but you’d want to be clear that you were rewarding a PI for extra workload, not incentivizing to recruit more patients for a given study.

Another advantage to an extra supervisory fee is that it allows the study site to tie at least one element of compensation to areas that are important to the site, including intangibles beyond the time and effort a PI puts into a given study.

One caveat, though: The supervision fee can inflate quickly for expensive studies. So the percentage may need to be adjusted downward for certain large-budget studies, such as one with a lot of expensive imaging services or interventional procedures that could drive up the fee beyond what the institution is comfortable with — or even beyond what could be deemed fair market value for an investigator’s services.

“It’s a nice mechanism by which to recognize the PI’s role, especially when you have a team of investigators participating in a trial,” Schick says. “It recognizes those extra tasks that fall squarely on the shoulders of the principal investigator but that may not otherwise be captured by whatever payment methodology you’re relying on to set a PI’s compensation for a particular study.”

To read part one of this series on the principles of investigator compensation, click here: https://bit.ly/3Es6tLS.