Home » Study: Clinical Teams Are Effective While Working Remotely, but Many Feel Burned Out

Study: Clinical Teams Are Effective While Working Remotely, but Many Feel Burned Out 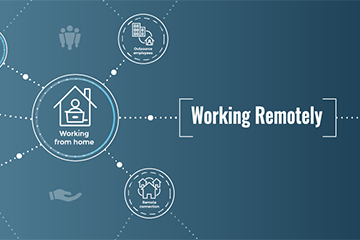 A global study conducted by Tufts’ Center for the Study of Drug Development (CSDD) and the Bill & Melinda Gates Foundation found that while trial researchers view themselves as effective at working from home and wish to continue doing so, the move to teleworking has also led to burnout.

“The results reveal that drug development professionals have been mostly satisfied with their organizations’ remote preparedness and responsiveness and feel supported by their managers and organizations,” the authors said. “In addition, clinical research professionals operating remotely during this global health crisis perceive that their productivity and effectiveness levels have been high, and the majority wish to continue to work remotely.”

According to the study’s 69-question survey on the experiences and effectiveness of remote clinical teams, most respondents felt that working from home during the pandemic had either a positive or neutral impact on their effectiveness.

In their self-reported performance assessments, a majority of respondents — 71 percent — graded themselves as “very effective,” while 26 percent scored themselves as “somewhat effective,” the study found. This lined up strongly with team assessments by remote team managers; more than three-fourths of them believed their teams were “very productive” (76 percent), while 21 percent marked them “somewhat productive” since the start of the pandemic.

Most of those surveyed also expressed a desire to keep working from home in some shape or form. A strong majority (86 percent) said they supported continuing with their organization’s remote setup, or something similar to it, even after the pandemic ends. The people most likely to support continued telework were respondents over the age of 35; conversely, those under age 35 were less likely to be supportive of a remote work model in the future.

Nearly half (57 percent) reported being satisfied with how their organization provided resources, the study found, noting that there were substantial differences seen in the levels of resource provision by organization type. Pharmaceutical/biotechnology companies and CROs were found to provide the most resources to their staff at higher levels compared to other types of institutions, such as nonprofits, the researchers said.

But on the negative side, a significant number of respondents said they felt burned out and less connected to colleagues as a result of telecommuting. Specifically, 55 percent reported feeling burned out and 42 percent felt their connections with other colleagues had weakened.

Those feelings of burnout were mainly due to the frequency of virtual meetings (67 percent), added job responsibilities (65 percent), variability and uncertainty (54 percent), and restlessness (50 percent), the study found. Additionally, respondents reported feeling troubled by their physical environment (45 percent) and depressed (40 percent). Younger workers, women and academic medical center/research institution respondents were more likely to report burnout, according to the study.

The study authors projected that it may become increasingly difficult to retain younger workers as the pandemic comes to an end, and they predicted younger workers may head to organizations that return to the workplace or offer greater face-to-face opportunities.

But with the vast majority of respondents expressing support for some form of remote working, the researchers stressed the importance of embracing flexible policies going forward. These policies should accommodate both employees who want to keep working from home and those who prefer a mix of at-home and in-person working, they advised.

“Offering flexibility to those who have responsibilities outside of work is critical and has been characterized in other studies,” the researchers said. “As organizations adjust and adopt policies to accommodate and support a global remote and hybrid workforce, newer models and opportunities to drive innovation and employee satisfaction will no doubt emerge.”

Communication technologies like video conferencing, cloud-based file-sharing and telehealth accounted for the majority of approaches being utilized by clinical teams early in the pandemic, Tufts CSDD found. eConsent and remote monitoring were also used on a large scale to support clinical trials.

In total, the researchers received 344 unique responses to their survey between Jan. 27 and April 9. Sixty percent were from personnel in pharma/biotech, 22 percent were from a CRO or vendor, 14 percent were from an academic medical center or research institution, and the rest were from other types of organizations, including government agencies, nonprofits and patient advocacy groups.