Home » Technology Innovations Most Likely to Carry Over to Postpandemic Era, Poll Shows

Technology Innovations Most Likely to Carry Over to Postpandemic Era, Poll Shows 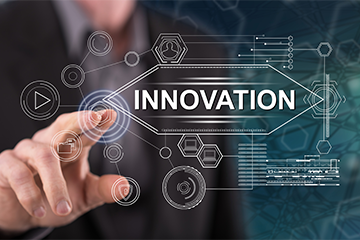 As clinical trial professionals prepare for postpandemic operations, they see technology adoptions and hybrid protocol designs as the innovations most likely to be continued after the crisis ends.

“Anyone watching the clinical trial industry over the past year can see the changes to protocol designs, patient monitoring, auditing and even some of the endpoints for trials,” said Jill Johnston, president of Study Planning and Site Optimization for WCG, during the opening panel at the MAGI Clinical Research vConference last week. “One result of the pandemic is that organizations are beginning to embrace more resilient and often digitally enabled endpoints that support options for remote participation.”

Johnson led the conference’s keynote session during which attendees were asked to participate in a four-question poll. In the first question, 77 percent of respondents said they were moderately or highly confident that changes made to trials during the pandemic will continue. 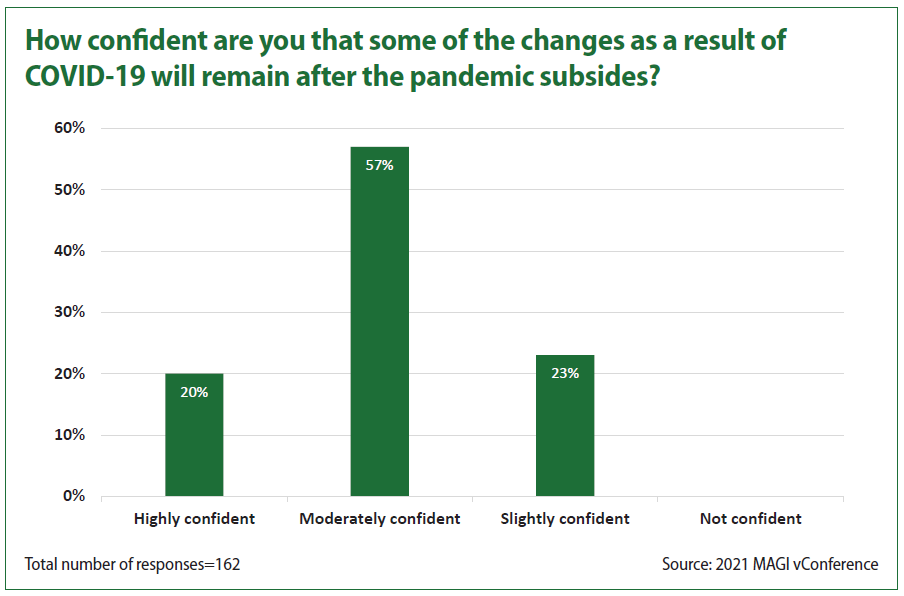 Panelist Kathryn King, senior vice president for clinical development at Aptinyx, remarked at how quickly the barriers to enacting changes to traditional trials — both real and perceived — fell once the pandemic hit. “There weren’t any other options in terms of how we were going to keep going,” she said. “A lot of the things that got put in the way previously just fell to the wayside. It wasn’t a matter of change agents finding ways over or around them.”

In the poll’s second question, respondents said technology adoption is the top activity most likely to continue postpandemic though that was closely followed by protocol designs with more hybrid visit options. 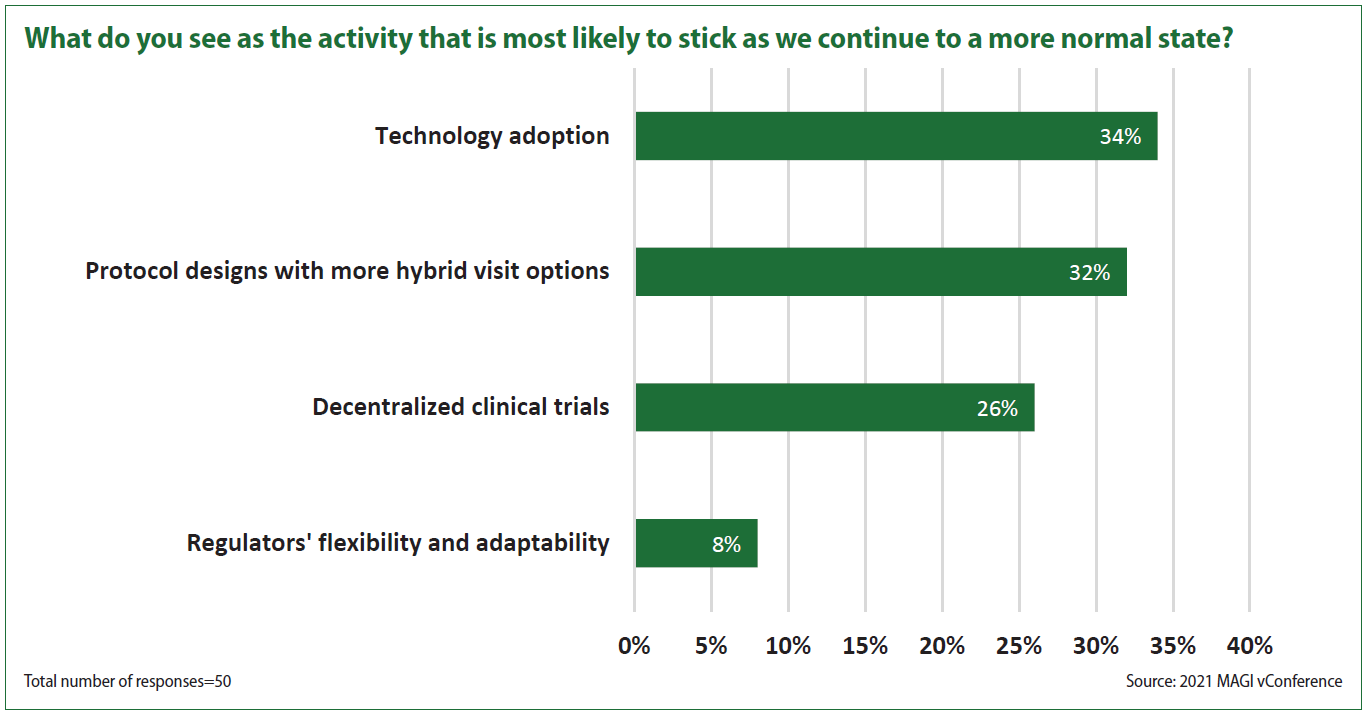 “We often joke that [the clinical trials enterprise] is a bit of a Frankenstein right now,” said Karri Venn, president for research at LMC Manna Research. “We’re deploying different technologies and piecing it together to benefit patients the most, but to also make it user-friendly for [site] staff. We want to make sure that we’re having some optimization when we deploy technology in clinical trials, so we definitely have a lot of work to go through.” 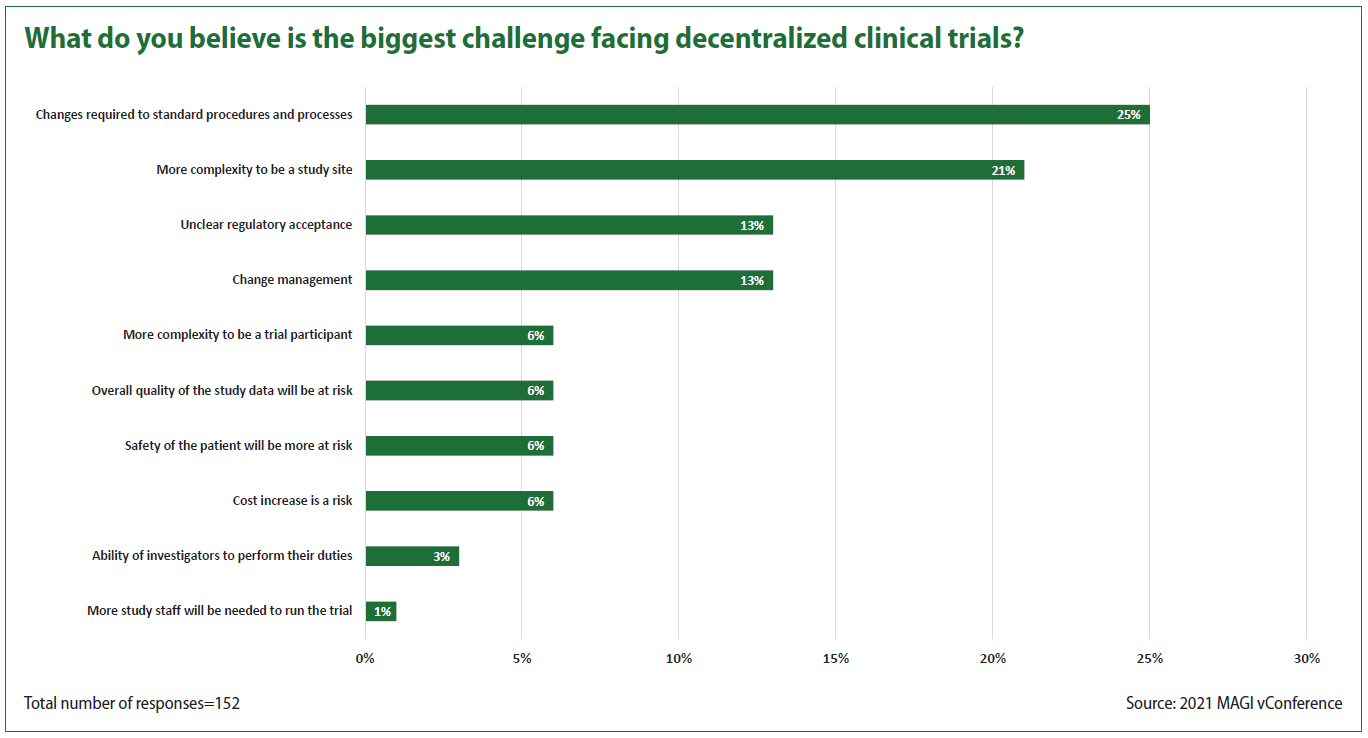 Much like the struggle to understand how to use real-world data in clinical trials, the best uses of decentralization will take a while to iron out, Venn said. “But getting to specific endpoints, not just collecting a lot of data, and what you do with that data, is going to be important. There’s a world of opportunity here.”

On the fourth poll question, respondents said greater participation in clinical trials and reduced costs were the top two benefits of decentralized trials. 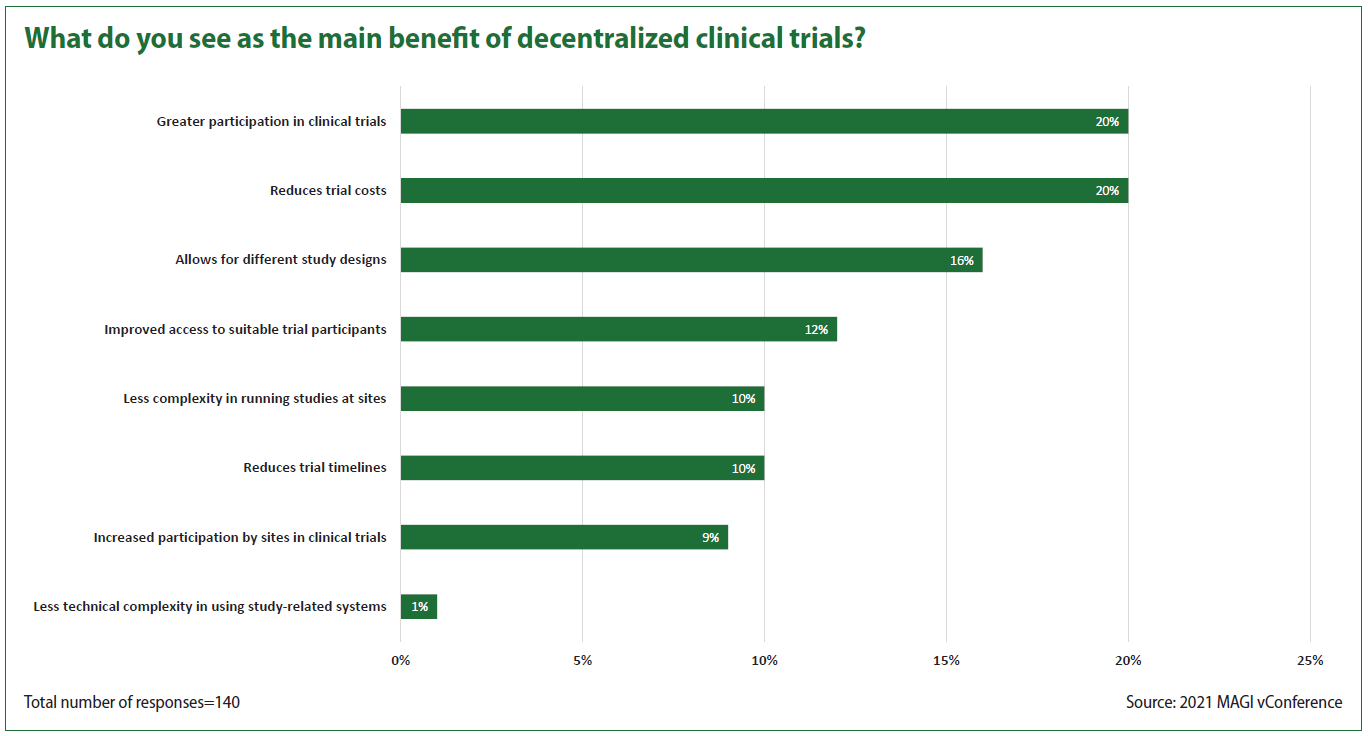 Venn acknowledged that replacing a traditional study with a completely virtual study would save on some costs. But, she said, there are additional costs that come with making such a change. “We’ve deployed a 100 percent paperless system and that came with cost, both with the actual technology itself … as well as the teams that we had to kind of create to implement the change.”

“We’re now actually coming together with different sites that are using the same technology to talk about workflow optimization and best practices so that we can see what’s the gain for the site,” she said. “But right now, it’s debatable.”