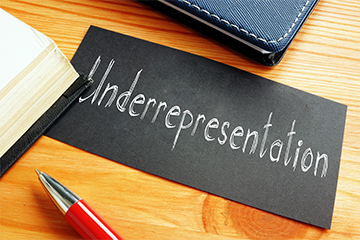 No matter how the data are crunched, the challenge remains that trials need to come up with new approaches for persuading reluctant minorities to participate in trials. And the problem has been exacerbated by the pandemic.

New surveys and a new quantitative analysis of existing data are convincing researchers that more work needs to be done when it comes to the pressing problem of underrepresentation of minorities in clinical trials.

A new quantitative analysis by the Tufts Center for the Study of Drug Development (CSDD) of 757 pivotal trials supporting drugs and biologics approved between 2007 and 2017 found Black, Hispanic/Latinx and Other participant subgroups were underrepresented while Asian participants were substantially overrepresented.

Asians, with an expected participation rate of 3.5 percent, were overrepresented by 148.9 percent. Both Hispanic/Latinx and the Other subgroups were underrepresented by 12.4 percent and 46.1 percent, respectively.

Although the Other subgroup in its analysis included indigenous communities, Smith said it was “entirely possible” that some pivotal trial participants preferred not to report their ethnicity, implying that Black or African American underrepresentation may be even more pronounced than what the statistics suggest.

Smith said CSDD plans to continue additional analyses and revisions from the data set. “Some of the things we have in mind [include] looking at disparity and FDA designations, looking at things like Priority and Breakthrough designations. We’d like to see what the representation among these drugs looks like and whether or not it’s similar to those without these FDA designations.” He added that analysts would also look at trial durations to determine whether more diverse trials have the same duration as less diverse ones. CSDD will also look to include additional data from more recent years.

“We are looking into conducting a similar study that looks at EMA approvals and the trials supporting them, as well as looking into discussions with the FDA on potential improvements that could be made to the [FDA’s] Drug Trial Snapshot,” Smith said. The regulatory agency provides annual snapshot reports to show who participated in clinical trials that supported FDA approval of a drug, highlighting differences among sex, race and age groups. CSDD’s collaboration with the FDA on snapshots could provide deeper analysis into the diversity of clinical trials.

According to CSDD, the snapshot reports have their shortcomings — specifically, that they do not report on missing data; they are static numbers that show only individual years, making it difficult to evaluate trends; and subpopulation disparities cannot be assessed because the reports only provide demographic distributions without comparisons to disease prevalence or Census figures.

CSDD said that while the availability of demographic data by drug varies, there were more data available for sex and age group, but ethnicity had the lowest available data. The research outfit said that over time, the availability of age and sex data had increased while race data were stable and ethnicity data, after a short decline, have since returned to previous levels.

The CSDD’s findings were underscored by the results of a survey conducted during the pandemic, which found that Black or African American respondents were far more afraid than Whites of contracting the novel coronavirus while enrolled in a clinical trial for a condition other than COVID-19.

According to a survey performed in August by patient recruitment firm SubjectWell, 55 percent of Black or African American respondents said they were “very concerned” about exposure to COVID-19, compared to 31 percent for Whites.

“These fears are very much real,” Jasmine Benger, associate director of research services at the Center for Information and Study on Clinical Research Participation (CISCRP), said at a CenterWatch webinar last week. “We’re starting to see that these individuals are at higher risk to contract the virus, but also potentially to suffer more serious complications as well. It’s something to take with us as we consider this moving forward in figuring out ways to help reduce some of these fears and also make sure that clinical trial participation is acceptable but also safe.”

Benger warned that while diverse representation in clinical trials is critical for the efficacy of new drugs and therapies, data collected by CISCRP over the past several years show the perceived importance of and the general willingness of people to participate in clinical trials doesn’t translate into actual participation.

Benger said SubjectWell found that a combined 40 percent of Blacks were either “not at all likely” (26 percent) or “not very likely” (14 percent) to consider participating in a clinical trial for a medical condition other than COVID-19. Among White respondents, only 13 percent said they were “not at all likely” and 15 percent said “not very likely.” Benger said the findings “really support what we hear when we talk to patients as well. People that identify as Black or African American are often generally a bit more hesitant to take part in research but are specifically more hesitant to take part first. It’s a fear of the unknown that is further magnified due to historical events.”

CISCRP conducted its own survey in March to determine the state of diversity in clinical trials. “We asked a lot of similar questions that we asked in 2019 [for our annual survey], but then we also expanded to really get an understanding of some of the changes that people may have experienced if they were in a trial,” Benger said. “The COVID-19 pandemic has made us all aware of clinical research, but it’s also certainly shined even more of a light on disparities among underrepresented communities.”

In addition to questions about diversity, the CISCRP survey focused on changes to trials resulting from the pandemic. The survey found that 42 percent of study volunteers experienced using telemedicine as a result of the pandemic, while 34 percent of respondents reported their in-person clinical visits were shifted to virtual ones and 26 percent had their clinical research study suspended. Another 21 percent of respondents said study medication had been delivered directly to their home, while 21 percent said they had used smartphone apps and 11 percent reported a reduced number of in-person clinic visits.

So what is the solution to the under-representation of minorities in trials? Benger said educational initiatives, as well as patient-to-patient communication, would provide opportunities for more inclusive clinical trials. “People can learn about clinical research directly from those who have participated and are willing to share a bit about their experiences and what they’ve learned,” she said. “What we’ve seen is that once people go through the process, they generally perceive it to be safer and they understand it a bit more. And there’s always an opportunity to really leverage that valuable healthcare provider relationship — to increase participation, but also to address some concerns, particularly among those under-represented communities.”