Sites that rarely, if ever, conducted virtual patient visits via phone or video prior to the pandemic have been convinced of the value of the technology for clinical trials in the future.

Nearly three-quarters (73 percent) of sites responding to a recent CenterWatch survey reported they plan to continue using telemedicine after the pandemic subsides, a major jump from the 12 percent that said they used virtual visits before the pandemic made them necessary.

“This is consistent with what we are hearing from institutions of all sizes in the U.S., from large academic medical centers to small regional hospitals,” WCG Clinical Executive Vice President Jonathan Zung says. “There is no doubt in my mind that sponsors and sites will be leveraging far more telemedicine visits in future trials based on their current experiences.”

Growth in trials’ use of telemedicine mirrors that in physician practices, a new report from market analyst Signify shows. Among telemedicine platforms used in the clinical care sector, Teledoc reported the number of doctors’ virtual care consults increased by 60 percent in the first quarter of 2020. Another platform, MDLive, reported a 50 percent volume increase in March alone, according to Signify.

The biggest challenge to using telemedicine, 56 percent of CenterWatch survey respondents said, is getting patients to accept it. This could be attributed to different things; however, patients often feel comfort in visiting with the principal investigator (PI) as part of the trial since they are receiving medical care.

It’s an issue of trust between patients and research sites, says Jeffrey Smyth, vice president and COO of Moore Clinical Research. “We experience similar issues with getting patients to consent for photographs during clinical trials; basically, no one wants to have their photos taken,” Smyth says, “so I can see how some may not be as trusting about a telemedicine visit.” But he believes most trial participants would like being able to complete visits virtually. “Knowing this, I would think patient buy-in for virtual visits will grow as these studies grow in number and the patients become more comfortable with the process.”

Increasing patient buy-in to trials post-pandemic is an issue of major concern to most sites responding to the CenterWatch survey. Respondents reported their biggest challenge will be getting patients back into trials, placing the issue above compensating for lack of resources and adjusting for missing trial data. Current trial participants and future trial participants will require additional communication and reinforcements from the site that safety precautions are in place to protect them from COVID-19.

More than one-third (39 percent) of the 385 sites responding to the survey said their biggest concern is restarting patient enrollment, followed closely by convincing already-enrolled patients to return to trial participation at 34 percent.

Zung says there are many issues causing sites to worry about post-pandemic enrollment, including safety, the shutting down of sites by sponsors and the need for additional resources.

“There will be concerns around the precautions that will be required for participant and research staff safety,” he says. “In addition, sites will likely need additional resources to engage participants around their willingness to continue in trials.”

Survey respondents placed lack of resources — supplies, labs and staff — third, fourth and fifth on a list of post-pandemic concerns. Nearly one-third of respondents placed assessing the impact on data already gathered at the bottom of the list of six concerns.

For many sites, those plans include increasing the use of remote coordinators to support existing site staff. Almost two-thirds (61 percent) of sites said they plan to continue using remote coordinators after the pandemic. Pre-pandemic, only 15 percent used remote coordinators, rising to 40 percent as quarantine conditions kept staff from working on-site. Remote coordinators can support on-site staff by handling data entry, patient follow-up and recruiting efforts, Zung points out.

Communication is the biggest barrier to using remote site coordinators, according to 57 percent of respondents, with 27 percent citing cost. Only 16 percent expressed concern about the technology needed for remote coordination.

Remote trial monitoring also is seeing an upward trend, with the number of sites that would allow sponsors or CROs to conduct remote monitoring jumping to 93 percent from the pre-COVID level of 74 percent. Currently, 88 percent of sites said they allow remote monitoring.

The greatest barrier to remote monitoring is monitors’ access to electronic records, according to 44 percent of respondents. Lack of resources was cited by 29 percent, followed by technology at 18 percent and staff training at 9 percent. 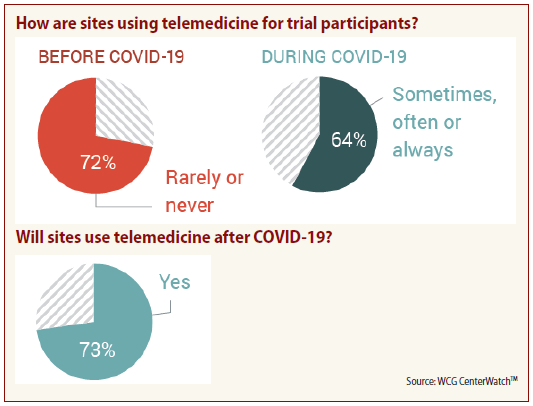