Contract research services are now the largest single cost category in pharma R&D spending, accounting for almost $90 billion last year, according to Tufts Center for the Study of Drug Development.

All in, CROs raked in about $33 billion last year for services including project management, trial monitoring, biostatistics, site management and medical writing — an increase of 12 percent from 2017, Tufts researchers found.

And it looks like sponsors are getting their money’s worth in terms of development speed. Sponsors that used CROs with established relationships with sites shaved 39 days off study initiation compared to sponsors that retain control. And CROs working with sites for the first time got studies started 77 days faster, on average. Time to build and release a database was 21 days faster when handled by CROs. 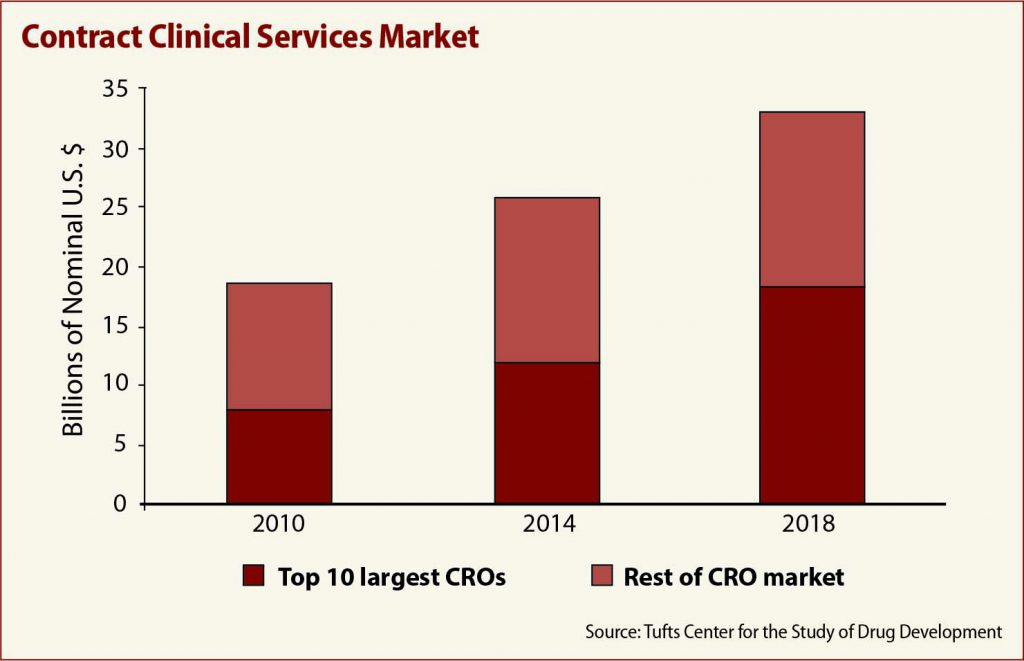 CRO advocates were cheered by the results of Tufts’ study. “The report clearly shows that clinical research and technology companies get you there faster,” said Matt Feldman, spokesman for the Association of Clinical Research Organizations. “Whether it’s risk-based monitoring (RBM) or decentralized trials, CROs are continuing to innovate and drive improvements in the drug development process in ways that are valuable to sponsors.”

Still, sponsors aren’t completely on board with the outsourcing model. Few companies reported using contract researchers in any kind of systematic way and only one-third of drug sponsors surveyed reported feeling satisfied that outsourced oversight processes are well established. Fewer than one-fifth of the drug companies, in fact, rated these processes “highly effective.”

The outsourcing rush also has led to more concentration in the CRO market, Tufts found. The 10 largest CROs controlled 57 percent of the money spent on outsourcing in 2018, a 12 percent increase in the past seven years.

But it’s not clear that outsourcing has cut drug development costs, which have continued to rise between six percent and seven percent per year. Tufts has previously reported that the average drug costs $2.6 billion to bring to market.

You can purchase a copy of the Tufts IMPACT report here: https://bit.ly/2UrVFXi.