The most pressing compliance problem clinical trials have, data from the FDA show, continues to be following their protocols to the letter.

The agency’s report on inspection findings in fiscal year 2019 places “failure to follow investigational plan” at the top of the list of most frequently cited observations, a spot it has held for the past five years. But the numbers are dropping, from 171 citations in 2015 to 108 in inspections conducted in 2019.

Good news for trial staff is the fact that informed consent observations have dropped out of the top five entirely. “Consent form not approved/signed/dated” citations decreased by two-thirds since 2015 (15 citations), falling to only five in 2019 and dropping to the tenth most-frequent citation, according to data analyzed by CenterWatch.

Case history records also have proven problematic over the past five years, consistently holding the number two spot, but again falling in total numbers from 2015 (92 citations) to 2019 (54 citations).

Appearing in the top five for the first time in 2019 is “general responsibilities of sponsors,” an observation that encompasses failure to select or adequately prepare principal investigators, ensure proper monitoring of the trial or report adverse effects to the FDA and investigators. And while the “failure to follow investigational plan” observation is directed primarily at sites and investigators, this citation dings sponsors for not making sure their trials are protocol-compliant.

The number of citations in this category generally have been consistent from 2015 to 2018 (average of 10 citations a year), but a four-point rise in 2019 (14 citations) is enough to take over the number three rank. Citations for inadequate drug distribution records, formerly in third place, have been cut in half since 2016, when they totaled 26.

IRBs also have improved their inspection performance, with citations for insufficient meeting notes more than cut in half, from 29 in 2015 to 11 in 2019.

FDA released its fiscal 2019 data on Sept. 17, two weeks before the end of the fiscal year, so the dataset is not complete for the entire year. 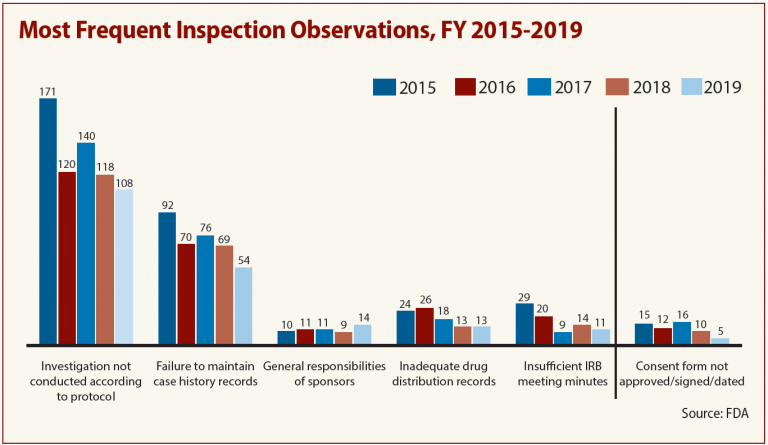